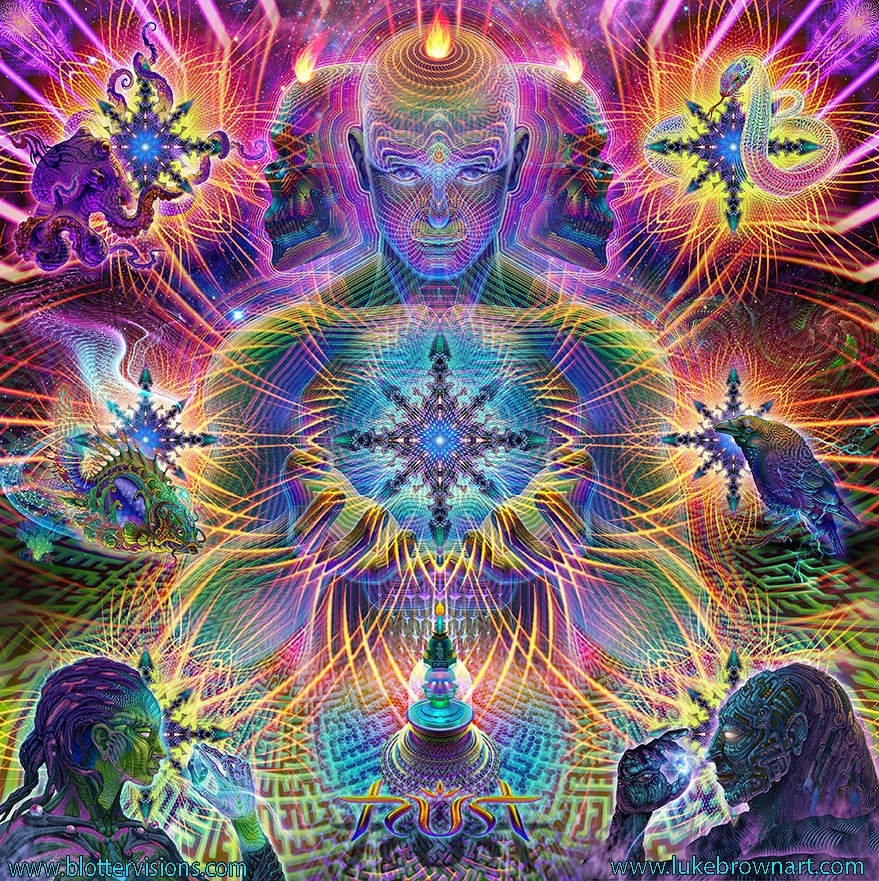 Tensegrity is a structural principle of equilateral suspension and balance. It was a crystal clear vision that emerged one night from a monumental metaphysical moment on the island of Koh Phangan in Thailand in the beginning of 2019. It was further developed and refined over the course of several weeks in Holland a few months later. It was a visionary state of sublime unity consciousness. An angelically sanctioned reinstatement of creative purpose. An exquisite glimpse into Intelligent Infinity, guided by several manifestations of archetypal forms. Talismanic totems in animal form revealed themselves, as well as the presence of interdimensional guides. All bound together in a shimmering gossamer bejewelled light web weave.

--The Omni Octopus "Cephalapodular", that manifests its innermost thoughts into the surface of its form. The ultimate embodiment of telepathic communication.
--The Fractal Fish, nimble and agile as it gracefully traverses multidimensionality. It playfully breaks through stagnation and self doubt.
--The Cosmic Crow, with the power of insight and the ability to manifest that which is seen internally.
--The Sublime Serpent "Serpinski Serpent", with its ability to continuously reinvent and shed obsolete versions of itself. It emphasises the importance of staying grounded and stabilised.
--The Starseed Dreamer, a masculine presence transcending concepts of outer technology. He awakens in the dream to the far superior internal technology. He holds a diamond symbolising refined awareness.
--The Starseed Awaken, a feminine presence that is crafting her world into being with pure intention. She holds a Cintamani stone reminding her of the unending support from our infinite cosmic family.
--At the base is the reminder to continuously TRUST in the higher mind that dreams itself into all possibilities in order to know itself. Microcosmically seen the through the eyes of an omnidirectional buddha being, suspended in a holographic imaginatrix
--At the top is the mind witness "Mind" that is dreaming up the play of maya in front of themselves, anchored in the present, past and future at its sides.
--And lastly in the heart is the point of pure awareness "Tensegrity", crystallised into form as a vajra of awakening. its presence is holographically reflected throughout the scene.